Another Monday night with Sal and his Adderall. He snorted his in the bathroom; I followed the more traditional route. Whenever I take “a peach,” as he calls them, I know I’ll be handling most of the night’s auditing paperwork. I always agree with the barter, because even after eight months on the night shift, I’ll take whatever help I can get.

I leave him halfway through a synopsis of a movie he recently watched, starring “Pierce Bronson and Liam Nelson,” before he can butcher the title, too. Or forget it altogether.

“No Vacancy” glows neon red above the front door. The epicenter of drug and sex sales in the 80s, the motel now enjoys historical status in one of the many revitalized, gentrified areas of a rapidly-growing city. It sits on a main artery of commerce, surrounded by outrageously expensive antique stores and restaurants serving organic, locally-sourced food. 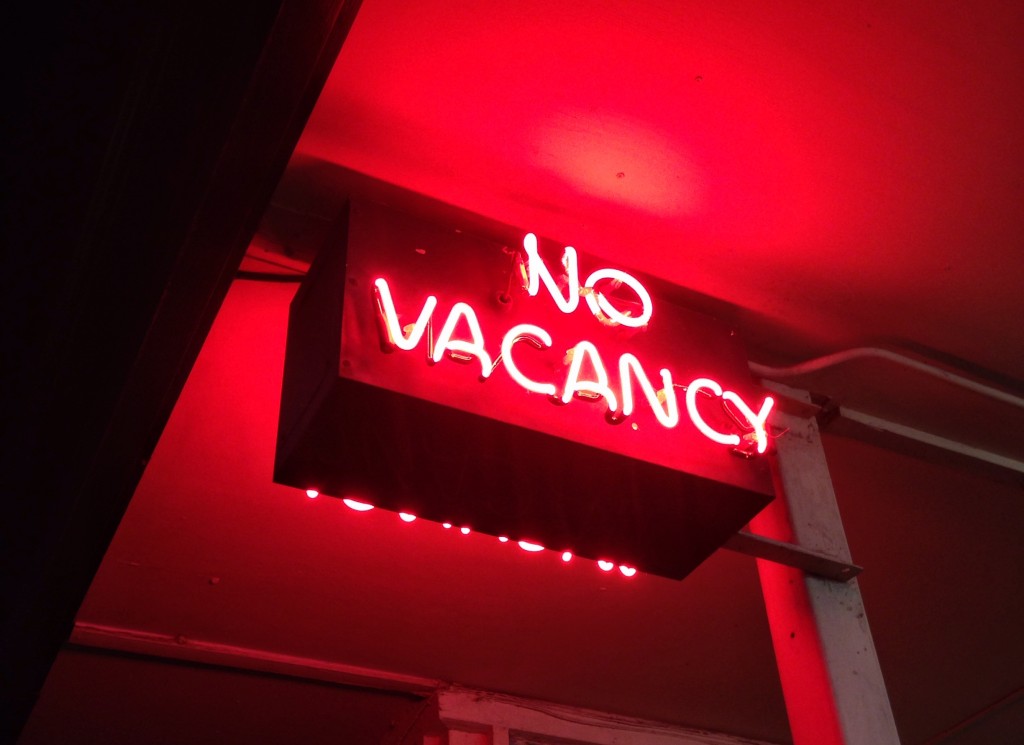 Of course, by the time I arrive, most have their lights off, or the servers are putting chairs on tabletops and taking trips to the dumpster, milking the clock for one last smoke break.

Traffic thins. Drunk couples spill from nearby bars and ooze down the sidewalk, and I wait. Even on busy nights, I have plenty of time to patch together, yet again, the sequence of events that led me here.

Did I always dream of growing up to be the motel security guy in charge of telling the drunk guest from 134 not to urinate in the middle of the parking lot at three in the morning? Is taming the giant, inflatable-penis-carrying bachelorette party my ultimate destiny?

I still don’t have any answers, but it’s not for a lack of time to think about them. I was never good about setting goals, and I could never tell you, even as a kid, what I wanted to be when I grew up. Let this be a warning, if you don’t do that sort of thing, you may find yourself wrangling drunks and seeing how people act when they’re just looking for a place to, as a coworker said, “sleep, shit, and screw.”

Before this, I worked a nine-to-five, multi-tasking, fast-paced customer service nightmare of a job at a downtown print shop. After nearly seven years, my fatalism led me to believe I would die hunched over a Xerox. Occasionally, so fed up with the job, I would spend my lunch hour frantically searching Craigslist for openings. So many postings spoke of similar “multi-tasking, faced-paced environments,” that I wondered if any place existed where people single-tasked in a slow-paced environment. If not, the possibility of relief from long stretches of continuous soft rock or sports commentary on the manager-controlled radio station might suffice.

It was a combination night auditor and night watchman position at a motel. I was surprised at how openly they acknowledged, even championed, the abundant downtime. I forwarded the email to my girlfriend with the message, “Dude, holy shit. Other than the not good pay, this is what I’m talking about.”

She was skeptical, worried mostly about the loss of time we’d have together and whether or not the reduced pay would threaten our already-precarious budget. Good points, both, but I was desperate. I quickly edited my résumé, wrote a cover letter, and followed the post’s instructions to stop by in person after 9 p.m.

Maybe it was the fact I still had a job to go to in the morning, one that paid the bills and had decent insurance. Or, maybe it was how quickly things moved from seeing the ad to sitting in the lobby filling out the application, or that the whole thing seemed like a lark, but I didn’t feel nervous. I’d recently finished a terrible story about lovers on the run from the cops that concluded in a motel, so I figured, at best, this could be a glimpse in to that world. I fell in to an immediate rapport with the two guys in the lobby, joking about the bleakness of Werner Herzog films. A section of the application asked about which books, films, and TV shows I enjoyed, and their lack of frowning disapproval was encouraging. I was asked to speak with the night manager, who was on duty.

Much of the interview, in retrospect, seemed to be a test of how well we could just, well, hang out. He discussed his interest in billiards, neurology, and divulged quite a bit of personal history and how he came to work at the motel. He had nineteen years of employment here, and he loved the amount of time it gave him to research his various interests, read, and simply think. Slow-paced? Check. And as for the tasks? The fundamental job of the night watch was to keep an eye on the property and guests. There were chores such as watering, laundering the pool towels, and fulfilling requests for things like extra pillows, but mostly I would watch and listen.

The final duty was to fill out the night report, documenting anything of interest for the incoming day staff and the owner. This could include unruly guests, maintenance issues I was unable to solve, or vagrants I had to escort from the property. It also served the larger interest of establishing a record of the egregiously awful, of guests who would never again be welcome.

After a week of additional interviews with the owner and day manager, as well as background checks to ensure my trustworthiness with the keys to the place, I was offered the position. My ambitionless inertia at the print shop was taken as a sign of stability, much appreciated at a family-owned motel where multi-year to near-decade tenures are the norm.

The restraint required to not break into song and dance when giving my two weeks was acknowledged in my own mental award ceremony of personal achievements. I was festooned with garlands, champagne-sprayed and hoisted heavenward. My family gutted a fatted calf.

The last few days of the job coincided with the first days of my overnight training. My manager insisted on a gentle transition, sensitive to the circadian chaos to come. My regular nine-to-five was about to become 9 p.m. to 5 a.m.

During my first trainings, I read the archived night reports. Most, fortunately, were brief: “The night was quiet. No problems to report.” Others, particularly one from a week prior, were lengthy and even mentioned summoning the police to the property. If made into a word tree, the words “loud” and “drunk” would be its thick trunk, with twisting branches of “smoking,” “talking,” and “arguing.” A pretty unpleasant tree.

I was told these cases, especially ones requiring the police, were rare and that I should just focus on establishing my new sleep schedule. Eight months later, and the idea of any firmly established sleep schedule, of some simple adjustment, has been replaced by the reality of struggling to manage shuteye in an inherently unnatural lifestyle.

I feel a slight twitching in my forehead. It reminds me of the Adderall, reminds me I need to check the audit paperwork, and to try and focus on numbers while Sal spits word after word, a scattered brain at 2X speed, on into the night.

A peaceful, quiet night. No problems.